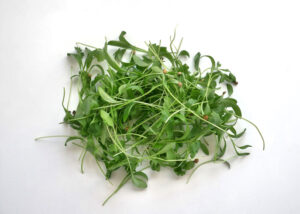 This cilantro lime shrimp microgreens recipe can be prepared as a light and flavorful appetizer or as the main ingredient for shrimp tacos. Our cilantro microgreens have the fresh, clean flavor profile of standard cilantro, but because we leave our husk intact, our microgreens deliver an aromatic coriander crunch.

Why do we love cilantro microgreens? Cilantro is noted for being perhaps one of the oldest herbs used by mankind, its use dating back to nearly 5000 years. The cilantro plant offers antioxidants along with vitamins K and C and minerals like calcium, magnesium, iron, and potassium. Infinite Harvest’s microgreens have even more microgreens benefits and yield up to 40 times the nutritional value of a mature plant.

Directions
Mix the shrimp with the seasonings (garlic, cumin, cayenne, salt). Add shrimp to a skillet with olive oil and toss for 1-2 minutes on medium heat, until shrimp are cooked through. Add the lime juice and mix in the chopped micro cilantro. Serve as a light stand-alone dish or use as a basis for shrimp tacos.

Enjoy this easy, healthful meal with The Infinite Kombucha Cocktail with Microgreens, another easy and tasty microgreens recipe. As a complimentary side dish, whip up a batch of Infinite Sunflower Guacamole.

Be sure to take a photo of your microgreens recipes and tag @infiniteharvest on social media.

Where to Buy Infinite Harvest
Infinite Harvests’ microgreens and living lettuces can be ordered online and picked up at the company’s vertical farm in Lakewood, CO Monday-Friday from 9 a.m. to 4 p.m.

Infinite Harvest microgreens are available for purchase at select grocery stores along the Colorado front range and at over 30 Whole Foods Market locations in Colorado, Utah, New Mexico, Kansas, Nebraska, Missouri, and Texas.